Seymareh Lake has Geographic coordinates 33 degrees 4 minutes to 33 degrees and 18 minutes north latitude and 47 degrees 12 minutes and 30 seconds to 47 degrees 31 minutes and 30 seconds eastern latitude is. The aforementioned region is located in the Zagros region of western Iran, in the southeastern province of Ilam, in Northeastern slopes are the magnificent mountain Kebir Kouh. This area is by Anbar of Kabir Kouh West and south, mountain range anticline in the north and northeast, Helush and Chem Mehr Plains in the east, Kuh Banahr and Talhab are enclosed in the northwest. Therefore, the plain of Darshahr is a bridge between them Anticlines are located and covered by sediments due to erosion of these anticlines. Is. The average altitude of this area is 650 meters. One of the oldest and most important The phenomenon is a large (100000 million square meter) large-screen slider.

This slip overlooks the Navidis Valley of Semareh and in the northeastern edges of the Kabir Kouq anticline to the geographical coordinates of 32 degrees 55 minutes and 7 seconds to 33 degrees 8 minutes and 22 seconds north latitude and 47 degrees 28 minutes and 10 seconds to 47 degrees And 52 minutes and 32 seconds oشf eastern latitude in the 5 km southeast of Poldokhtar in the west of Khorramabad asphalt road of Andimeshk and 15 km east of Dareshahr city between Ilam and Lorestan provinces. Kabirkuh anticline is eaten from important Zagros anticlines. Kibirkuh is lithologically composed mainly of the Asmari Formation, which is generally carbonate in lithology, including dolomite limestone, Chilean and clay lime. Kibirkhh, from the age of oligocene, continues from the Cenozoic geology to Bordigalin from the lower Miocene (upper asmari). After this formation, Gachsaran sediments are evacuated. The Asmari Formation is divided into three upper, middle and lower asmari parts based on fossils and age. Also, marl limestones form the upper Eocene section and the shale of Kazhdumi Formation with the age of Cenomanian, parts of Kebirkuh and the area of ​​landslide occurrences. 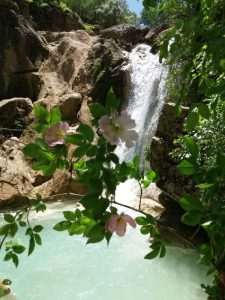